Taurine is mostly known from energy drinks containing a high dose of caffeine that used to be allowed on the market in the past, thus we might perceive it as some harmful stimulating substance. However, it was used in energy drinks to ameliorate the unpleasant side effects of their excessive caffeine content. Without it, so many caffeinated products would have had unpleasant effects. Taurine is an amino acid like organic acid that accounts to 0.1% of the weight of the human body, and it has a key role in the healthy functioning of our body from many aspects. Unlike many animals, humans have lost their ability to synthesize taurine, therefore we require an external (dietary) source to maintain its adequate level. Only food of animal origin contains taurine. Dairy products contain hardly any, meat contain some (30-160 mg/100 g), while seafood such as crustaceans, mollusks and cephalopods contain about ten times as many as meat does (300-900 mg/100 g).

These creatures high in taurine are those that were the most easily available for our ancestors, as they can be found in coastal areas and one does not have to fish, merely collect them. The “aquatic ape” theory, which is more and more accepted among biologists, says that these were our main source of food and it was their high omega-3 DHA content that allowed our brain to grow so large. Maybe their taurine content was a similarly important factor? Either way, it seems like we are “designed” for a taurine-rich diet. Consuming mollusks or crustaceans several times a day is not typical in the modern western diet, thus the intake of taurine is also low (30-400 mg/day). It follows from the above that we require taurine supplementation. If this is so, then the occurrence of life-style diseases should be higher among people with low levels of taurine, while groups that consume high amounts of it should be more healthy. At the same time, taurine supplementation should decrease the risk of these diseases or ameliorate the symptoms of already developed conditions. Let’s see if this is the case!

According to a study in 2009, taurine is the key for the longevity of Japanese people. Another study from 2006 found that in Asian countries people with the highest level of taurine measured in their urine were the most healthy and had the lowest occurrence of coronary diseases. This was confirmed by a more recent study in 2012, in which it was also noticed that people with higher taurine levels have lower blood pressure and body mass index as well as better blood lipid profile. Low taurine levels in the body can be detected in diabetes, cancer, or renal, cardiac and hepatic insufficiency.

Contrary to previous opinions, in a review published in a medical journal in 2012, taurine was held as one of the most important essential substances in our body, the optimal level of which can only be maintained by consuming food or dietary supplements with high taurine content. Similarly, an earlier review in 2002 concluded that the lack of taurine is more common than we think, as it is difficult to measure and it is not stored in our body. Providing taurine supplementation for infants is regarded particularly important (by now, high quality infant formulae do contain taurine). We can see that the taurine supply of the body has a close relationship with the occurrence of life-style diseases, thus it is important to keep a diet rich in taurine.

Can we achieve the same beneficial effects if we simply supplement our diet with taurine? To answer this question, here are some human clinical studies about the effects of taurine supplementation:

In a recent study in 2014, 10 patients with advanced gum disease were given 500 mg taurine per day for 15 days. Their condition improved as early as within such a short period, though 500 mg is a very low dosage. Diabetes: In a study in 2010, patients with type I diabetes received 1.5 g taurine daily, which improved the state of their blood vessels already after 14 days.
Weight loss:

In a study in 2004, obese patients received 3 g of taurine daily for 7 weeks. Their weight reduced significantly and their blood lipid results improved.

In a study in 2003, 1.5 g taurine was administered to young smokers whose blood vessels were already clogged from smoking. Their blood vessels dilated already after 5 days and their diameter became the same as that of non-smokers.

Taurine increases sports performance as well (both strength and endurance), while it protects against injuries, oxidative effects resulting from sports activities and muscle soreness.
Liver diseases:

A dose of 2 g taurine per day for 3 months has significantly improved the condition of people with liver disease.

Recently, there have been many positive results regarding taurine in animal studies to treat tinnitus. However, such an effect on humans has already been proved.

Bile production requires a large amount of taurine. Without taurine, the production is insufficient, thus those who experience problems digesting fat-rich foods should take taurine supplementation. 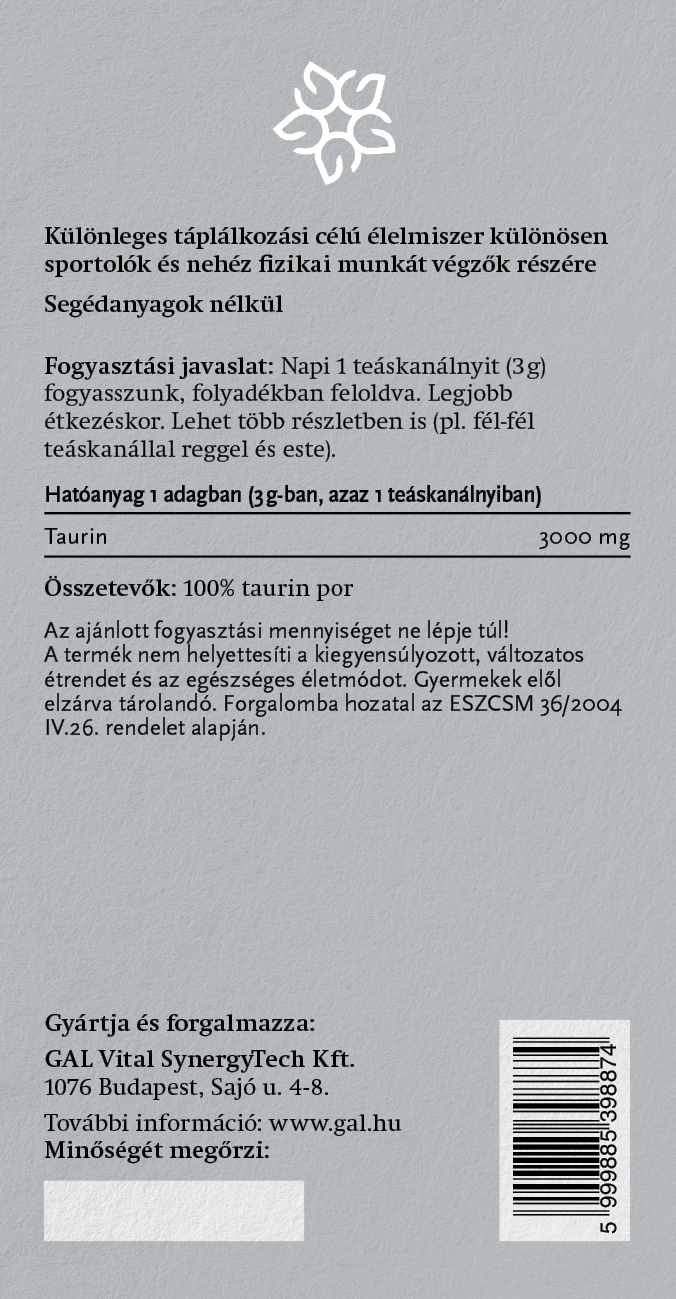