According to their original definition, prebiotics are substances that have a positive effect on gut flora, which means they increase the number of beneficial “good” bacteria – commensal bacteria – while decrease or at least do not increase the number of harmful, “bad”, opportunistic bacteria. In other words, they represent a source of nutrition only for “good” bacteria. However, even in scientific context the term “prebiotics” is often used for substances with general positive effects because they can nourish beneficial bacteria, often neglecting the fact that they also feed “bad” bacteria.
Different prebiotics – and from now on I will also use the word in its recent and not in its original sense – have different selectivity. Some prebiotics are more selective towards good bacteria, while others are less selective, and thus in many cases they serve as a nourishment necessary for the growth of harmful bacteria as well.

This means that people with healthy gut flora, containing a lot of “good” bacteria and only few “bad” ones, will benefit from any kind of prebiotics taken to help improve their gut flora and thus their health. While it is very important to those with poor or not sufficiently healthy gut flora to carefully select the type of prebiotics they use, because it can easily result in increasing the number of “bad” bacteria, which were already more dominant, and thus decreasing the number of “good” ones. Recently, this has been realised, and a number of clinical studies were arranged to demonstrate that by avoiding foods with prebiotic ingredients, such as most vegetables and fruits, the symptoms of IBS/IBD and other intestinal problems can significantly decrease while the composition of gut flora can be improved.

The most commonly used and recommended prebiotics, inulin and fructooligosaccharides (FOS) are not really selective, many harmful bacteria can grow on them and they might cause problems for many people.

According to studies performed so far, “sugars” in the group of galactooligosaccharides (GOS) seem to be the most selective. There are two main types: alpha- and beta-GOSs. Alpha-GOSs can be found (unfortunately together with inulin and FOS) in many legumes, but beta-GOSs are even more selective and they can be found solely in milk. There are many subtypes of beta-GOSs, and depending on what kind of bacteria is used to produce them, different GOSs are produced in different ratios. Bimuno® is the only GOS produced by a Bifidobacterium that forms an important part of healthy gut flora and can be found in breast milk. The GOS mixture in breast milk is produced this way. No wonder that according to research, the Bimuno® GOS appears to be completely selective also in full dosage. In summary, beta-GOSs are the most selective prebiotic substances, and Bimuno® is the most selective among them – which is practically perfectly selective.

If we think about it, it is no surprise that the most selective prebiotic is the one that is present in the largest amount in breast milk. The bacteria used in Bimuno®, also present in breast milk, transforms the lactose in breast milk into a GOS mixture similar to Bimuno®. Newborns arrive to a world full of bacteria with an almost sterile gut flora; when else would it be more important to stop bacteria from settling and growing without selection? The lactoferrin in breast milk is also of great help in this process, but we will tell more about it another time :) Just a quick note: an elementary or close to elementary diet supplemented with Bimuno® and lactoferrin would be the most similar to the process when the gut flora is built up in an infant, and this way any problems related to gut flora could be treated within 1 month.

If someone has poor gut flora, I can only recommend Bimuno®. Later on, as your gut flora improves, more and more types of prebiotics will be beneficial, just as more type of food as well.

• It is the prebiotic that causes the least bloating;  it is not a FODMAP, and can be used in case of SIBO,  unlike other prebiotics.

• On the long run, it helps decrease susceptibility  to constipation and/or diarrhea.

• Improves the gut flora of IBS patients and decreases  their symptoms.

Immune system, stress, body composition/metabolic syndrome
It decreases the level of the stress hormone, cortisol, by approx. 30%. It promotes the functioning of the immune system, reduces the occurrence of infections even in the respiratory tract, as it increases the amount of immune substances in the saliva and the nasal mucous. Healthy gut flora is also the key for an ideally lean body, and a good marker of metabolic syndrome. The body composition and other metabolic markers of obese people with metabolic syndrome improved as a result of Bimuno® treatment, also detected in the composition of their gut flora measured in stool samples.
In my earlier essay on prebiotics and probiotics, published as a newspaper article, I discussed the problems resulting from the inappropriate selectivity of general prebiotics in detail, together with other information about the gut flora.

If you are interested in this topic, I recommend reading this: https://www.facebook.com/notes/szab%C3%B3-g%C3%A1l-bence/az-eg%C3%A9szs%C3%A9ges-b%C3%A9lfl%C3%B3ra/1737060196525305/
I had not known Bimuno® prior to writing this article, and I did not know about selective prebiotics either. I would also like to add a clarification to the article: it is better to make moderately spicy foods, because every spice and medicinal herb has an inhibiting effect on enzymes, such as coffee, tea, chocolate and cocoa and every food containing flavonoids or catechines. It is best to consume these at least half an hour before eating or at least 2 hours after eating. In the Bimuno® Flora Fiber Complex, Bimuno® is mixed with a small amount of micronised bamboo fibers for easier dosability, which is also a good complimentary substance for Bimuno®: bamboo fiber is a “non-scratching”, gentle, non-fermenting, non-prebiotic fiber.

One dose of Bimuno® contains about as many lactose as a spoonful of milk. This is not much, and according to plenty of feedback, the small amount of lactose in Bimuno® does not cause any problems even for people with severe lactose intolerance, while even a fraction of this amount can cause problems when using other products. There is a research study claiming that beta-GOSs can reduce lactose intolerance, which fact may explain this positive experience. However, if you have severe lactose intolerance, it is best to start with a half or quarter of a dose, and slowly increase the amount to a full dose. Do not increase the dose suddenly, even if you do not experience any problems.

Bimuno® contains traces of milk protein, but one dose contains less then one single drop of milk. Such a small amount can be considered negligible even in case of some autoimmune diseases, but if you have such a condition or you suffer from extreme severe milk protein allergy, you should also start with a quarter or half dose, and slowly increase the amount watching your symptoms carefully, and if you experience any problems, stop or suspend taking the product.

Poor gut flora is often a significant factor in the occurrence of these allergies and autoimmune conditions, and Bimuno® helps improve gut flora, thus its net effect is likely to outweigh the possible negative effects of milk protein traces or a small amount of lactose. Unfortunately every beta-GOS product contains milk protein and lactose. Bimuno® has the least of them in a single dose compared to other b-GOS products – this was also an important aspect when choosing this substance. Besides, we make further measurements on the produced batches of Bimuno® together with the producer of the basic material, and the batches with the least milk protein content are spared for us, and we use only these when manufacturing the Bimuno® Flora Fiber Complex. These contain almost undetectable amounts. 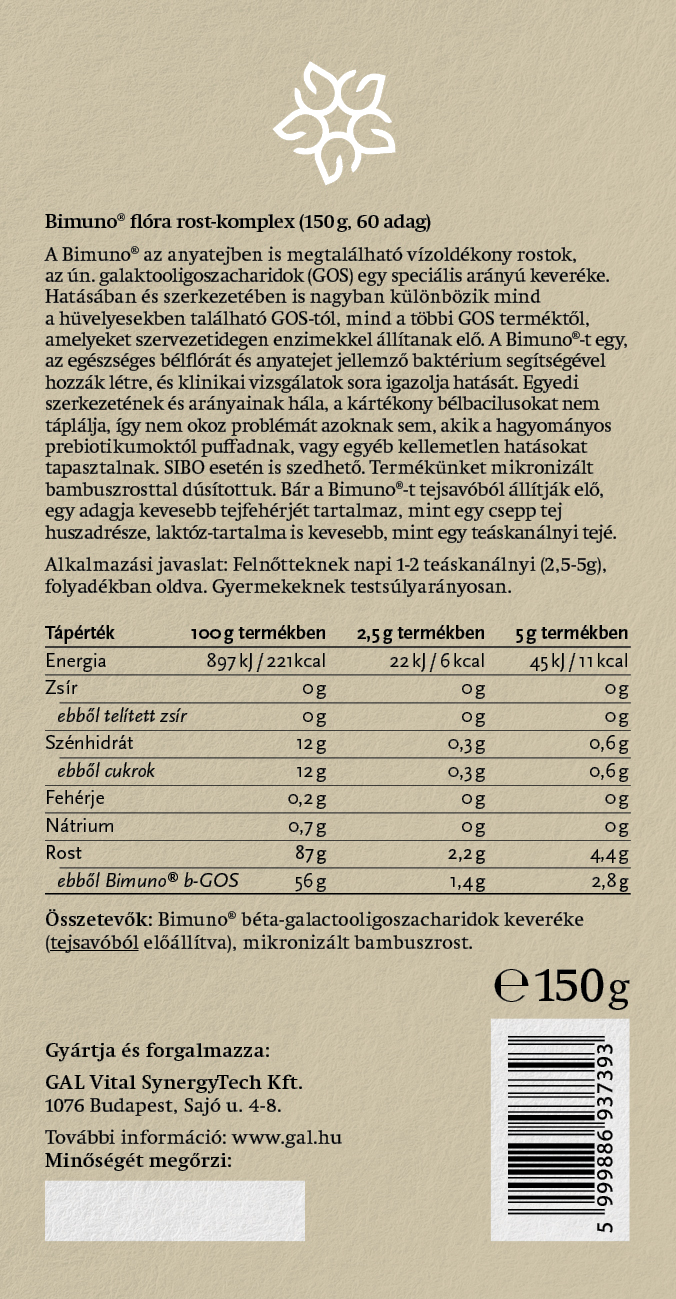