Vitamin D3 is undoubtedly the most important vitamin worth taking by everyone for health preservation. The populace in general lacks sufficiency in vitamin D3, this deficiency is one of the primary causes of most common illnesses. Fortunately, as a preventative and often a remedy it is remarkably cheap and accessible, making it generally affordable to all. Vitamin K2 is similarly important, and it is also commonly lacked, requiring supplementation, as we hardly eat food rich in K2 (bone marrow, brain and offal of grazing animals, viscera, natto), as opposed to our ancestors. High amounts of vitamin K1 are also able to increase the levels of vitamin K2 and K3 in the body, and those who eat lots of leafy greens have ample vitamin K1 intake, but this is still insufficient to achieve adequately high levels of K2 (and K3).

Why is it important for everyone to supplement vitamin D3 and K2?

Vitamin D3 is undoubtedly the most important vitamin worth taking by everyone for health preservation. The populace in general lacks sufficiency in vitamin D3, this deficiency is one of the primary causes of most common illnesses. Fortunately, as a preventative and often a remedy it is remarkably cheap and accessible, making it generally affordable to all.

Why is vitamin D3 so important and how is it possible that almost everyone suffers from severe insufficiency?

Historically, many research studies focused on the relationship between diseases and vitamin D3 levels in the body and have determined its function and effectiveness. Its essential role in the development and maintenance of bones and teeth, among other processes, has been understood long ago. The occurrence of cancer, cardiovascular and neurological diseases as well as diabetes is significantly lower in people and populations with higher levels of vitamin D.

Humans originated in the equatorial areas, where our predecessors were exposed to lots of sunshine on a daily basis. Thus, a large amount of D3 was produced in our skin.

It takes 2 or 3 days for D3 to be transferred from the skin to the body, but today we wash it off our skin every day. Our ancestors did not use soap, shower gel or hot water, which is important as these products wash away D3, while sunscreens inhibit its production. Consequentially, our ancestors had high levels of D3, and we are genetically adapted to these levels. I has been scientifically proven that the lack of it impacts negatively on our general health. We are simply not built to function adequately with lower levels of vitamin D3. Thus, the risk of exposure to the so-called new civilizational diseases can be significantly decreased once balanced Vitamin D3 levels are achieved, especially with regard to cancer. Concurrently, D3 may greatly assist in preventing the development of upper respiratory tract and influenza infections, as it is probably one of the best immune-boosting substances available.

The vitamin D status of your body can be measured from blood tests at a low cost. This test should measure the level of 25-OH-cholecalciferol in particular. According to research and expert opinion, the ideal and adequate levels fall between 100 and 175 nmol/L (= 40-70 ng/ml), with many professionals claiming that even higher values are harmless. Historic data indicates that unfortunately, most people have values much lower than the minimum healthy level.

It is practically impossible to achieve the sufficient levels because of our normal hygiene rituals compounded by inadequate exposure to sunshine. Studies performed in 2007 on windsurfers in Hawaii, concluded that the majority had a vitamin D deficiency, even after an average
of 22 hours per week exposed to the sun, without the use
of sunscreen, wearing normal swimming shorts.

Normal food consumption cannot provide sufficient amounts of D3 even with food diets rich in D3 (e.g., fish, fish oils, liver, fortified cereals etc.) the downside to enriched diets as described is that these contain even higher levels of vitamin A, which has more acute side effects contrasting to D3.
Luckily, taking a D3 supplement is an easy and cheap way to increase the D3 level in your body assist in reaching the optimal, 100-175 nmol/L (40-70 ng/ml) range.

Why is it important to take vitamin K2 and D3 together?

Probably the most important role of vitamin K2 in the body is that it can activate proteins responsible for the build-up of calcium where it is needed most (bones and teeth), and not where it is detrimental (soft tissues, kidneys, blood vessels). Scientific studies have confirmed that the occurrence of coronary atherosclerosis and osteoporosis decreases proportionally to vitamin K2 consumption. An insuffiency of vitamin K2 exacerbates calcium intake which can be expressly harmful. With an appropriate vitamin D3 and K2 intake, our bodies receive the requisite amount which is utilized to the greater good.

Though it is difficult to overdose vitamin D3, the harmful consequences of a possible overdose (abnormally high levels of blood calcium and calcium depositions) can be prevented by the intake of vitamin K1 and particularly of vitamin K2, and as vitamin K also promotes the effects of D3, it is worth taking vitamin K1 and K2 in addition. Vitamin K plays a key role in helping the blood clot, preventing excessive bleeding. Unlike many other vitamins, vitamin K is not typically used as a dietary supplement. Vitamin K is actually a group of compounds. The most important of these compounds appears to be vitamin K1 and vitamin K2. Vitamin K1 is obtained from leafy greens and some other vegetables. Vitamin K2 is a group of compounds largely obtained from meats, cheeses, and eggs, and synthesized by bacteria. Vitamin K1 is the main form of vitamin K supplement available in the U.S.

One major causes of cancer is the lack of vitamin D3. Several scientific studies have demonstrated that the risk of developing cancer and the level of vitamin D3 are inversely related. Some estimates indicate that the occurrence of the most common cancers could be reduced even to the third of the present number if everyone took vitamin D3 supplements. Many physicians consider elevating D3 blood levels to 100 ng/ml as an important factor in cancer treatment. There is increasing evidence pointing to the anti-tumor effects of vitamin K1, K2 and K3.

With optimal levels of D3, one is less prone to influenza virus and other infections; even if one has symptoms, they will be will be milder and one will recover more quickly. After the first influenza symptoms appear, it is has been proven to be effective if one takes 50 thousands IU vitamin D3 three times every 12 hours, e.g., in the morning, in the evening, and the following morning (after the third, reduce the dose to the original recommended maintenance dose, 5-10 thousands IU).

Vitamin D3 helps to “fine-tune” the immune system, thus it can be helpful in autoimmune conditions, for example in case of multiple sclerosis or inflammatory bowel diseases.

Vitamin D3 can prevent and ameliorate both diabetes type I and type II.

By its blood pressure lowering, stroke and metabolic syndrome preventing effects, Vitamin D3 reduces the occurrence of cardiac death, and it is also generally protective against cardiovascular diseases. K2 prevents (and according to observations, reverses) cardiovascular sclerosis, just as the sclerotic alterations of other soft tissues and organs (e.g. kidneys).

Vitamin D3 prevents and relieves the symptoms of depression, which is not surprising as sunbathing is known to have a similar effect, partly due to its D3-level increasing effects.

D3 can enhance the fertility both in men and women.
It increases the levels of testosterone in men. It is also effective in case of endometriosis, PCOS and preeclampsia, and decreases the occurrence of pregnancy-related insulin
resistance and preterm birth.

Besides influenza, D3 is also useful in preventing and treating TBC, asthma, COPD and other respiratory conditions.

K2 and D3 together prevent and reverse dental calculus, tooth decay, and can even seal smaller dental cavities (at least the dentin layer). When taken from early childhood, it ensures the development of straight, healthy teeth anda nice, symmetric face.

Both K2 and D3 help to prevent osteoporosis; they are
essential for developing a strong, healthy and flexible bone structure.

In a study, large doses of vitamin K2 significantly improved the status of patients with Alzheimer’s disease.
Increasing the level of vitamin K3

High doses of vitamin K1 significantly increase the production of vitamin K3 in the body. Based on current studies, vitamin K3 is a promising option in cancer treatment.

Our product contains the most active and natural, MK-7 form of vitamin K2, and to promote vitamin K3 production, we have also added a large amount of vitamin K1. All these substances are then dissolved together with natural vitamin D3 obtained from “sunbathed” sheep wool wax in USDA Organic certified extra virgin olive oil, stabilized with a natural vitamin E complex. It does not contain any other additives, and due to being dissolved in oil, it has an excellent absorption rate.

It is best to take it during meals. Drop the liquid onto a spoon or directly in your mouth. It can be dropped on food as well, but do not mix it into a drink as the oil would float on the surface and part of it would remain on the edge of the glass and thus would be wasted.

Consume between 12-30 drops per day. For children, the recommended dosage is 3 drop per 7 kg of body weight. In case of tooth decay or dental calculus, keep the liquid in your mouth for a long time, spreading it over your gums and teeth with your tongue. 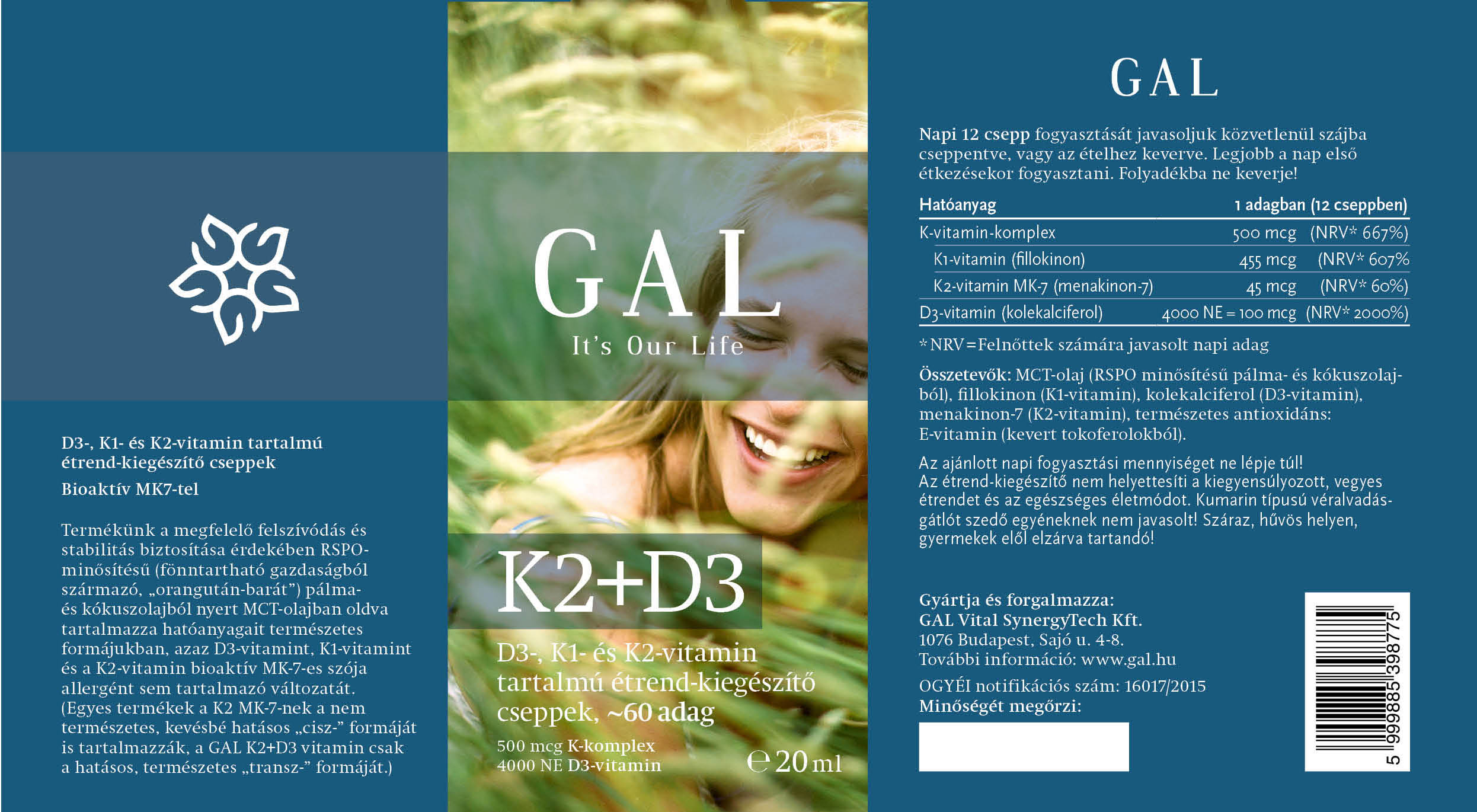